Vibrant Kuala Lumpur and its surrounds have many exciting and attractive places to visit – and a good way to reach them is by public transport, such as taxis, public buses or Light Rail Transit. An excellent option for first-time explorers is the hop-on, hop-off bus service.

At 88-stories, the Petronas Twin Towers is the world's tallest twin structure and dominates the Kuala Lumpur skyline. Inspired by Islamic geometric shapes, it’s located in the heart of KL, about 30 minutes drive from Bandar Sunway. It contains office buildings, conference halls, a large park and the upmarket Suria KLCC shopping centre. A visit to the sky bridge, open from 8.30am - 5.00pm, Tuesday to Sunday, is an impressive experience. 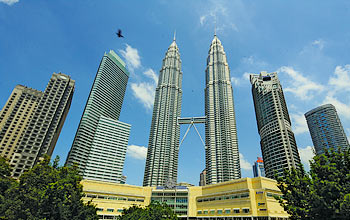 Located within the Petronas Twin Towers is the Malaysian Philharmonic Orchestra, whose beautiful concert hall was designed by Argentinean architect Cesar Pelli, a tall-building expert, who designed the whole Petronas building. The concert hall has hosted many of the world’s best-known artists and orchestras, including Dame Kiri Te Kanawa, Harry Connick Jr, the Count Basie Orchestra and the BBC Symphony.

The 421-metre-high KL Tower is another feature of the city skyline. Catch a high-speed lift to the 335-metre-high observation deck for an exhilarating bird’s-eye view of the city's eclectic architecture and lush green spaces. Enjoy a special meal atop the tower at the Atmosphere 360 revolving restaurant while taking in the shifting panorama of the city below. The Central Market is a fine example of Kuala Lumpur's architectural heritage. It’s an air-conditioned arts and crafts market, where you can enjoy hands-on batik painting, Chinese fortune telling, Malay shadow-puppet plays, Indian dances and other performances and demonstrations. Multiple visits to this treasure trove are highly likely. 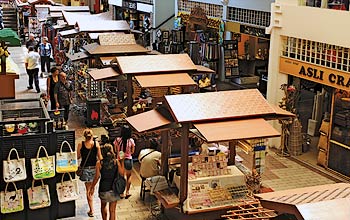 The centre of Kuala Lumpur's original Chinatown, Petaling Street maintains much of its traditional atmosphere, especially during the night markets. Wander and enjoy the sights and sounds, sample the delicious food and check out the stalls, which sell everything from gems and incense to toys and t-shirts. Within walking distance of Central Market, Petaling Street is a KL must-see. 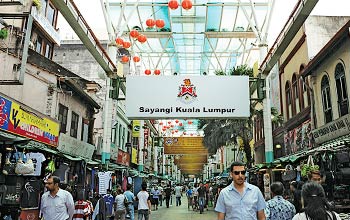 Islamic art and architecture is truly sublime, and one of the best places to submerge yourself in its extraordinary history and influence is the Islamic Arts Museum, the largest of its kind in South-East Asia. Malaysia’s beaches and warm tropical waters are famous, but if you want a taste of the life aquatic without getting wet or leaving KL, visit the Aquaria KLCC at the Kuala Lumpur Convention Centre. 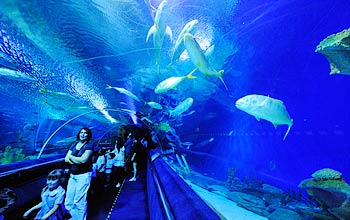 If the hustle and bustle of life in KL ever gets you down, transport yourself to the green and serene KL Bird Park. Set among the beautiful 150-acre Lake Gardens, which is also home to the Kuala Lumpur Butterfly Park, orchid and hibiscus gardens and the former Malaysian Parliament House, the 21-acre bird park is one of the world’s largest, covered, walk-in aviaries. It’s home to more than 3000 birds of some 200 local and foreign species.

Another great escape from the city in the city is FRIM. Its many attractions include the 150-metre-long and 30-metre-high canopy walk and a beautiful collection of traditional Malay houses. 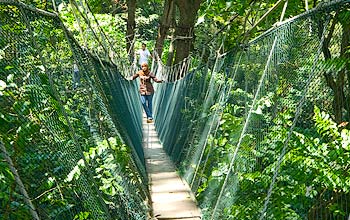 Located in a limestone outcrop, 15 kilometres north of Kuala Lumpur, Batu Caves is a popular tourist destination, especially during the annual Thaipusam Hindu festival. Climb the 272 steps leading up to the main temple cave and visit the nearby Ramayana Cave with its evocative scenes of Indian epic myths. Rock climbing is also popular on the massive cliff face. 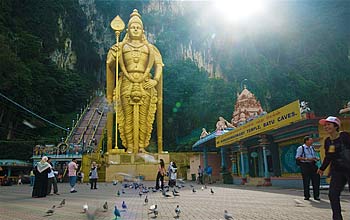 Discover the world with us

With a third of our students hailing from overseas, Monash University Malaysia is a cosmopolitan community. You can join us by enrolling in a full course or for a semester or two under our study abroad and exchange options.

You need a Malaysian Government Student Pass to study as an international student in Malaysia, which we help you get. We also help you meet the related health requirements.