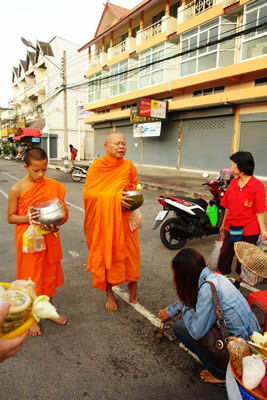 Giving alms to Buddhist monks early in the morning

This year’s study trip to Chiang Mai consisted of 17 students from the School of Arts and Social Sciences (SASS). They hailed from the countries of Australia, China, India, Indonesia, Malaysia, Sri Lanka and Zimbabwe. Accompanying us was our Pathfinder, Dr. Yeoh Seng Guan, a senior student chaperone, and four highly competent student guides from Chiang Mai University. For part of the trip, we were also joined by two SASS alumni and two former student guides from the Philippines study trip (in 2007). The trip took seven days, but afforded its travelers a lifetime of experiences.

Our host institution for the trip was the Regional Centre for Social Science and Sustainable Development (RCSD), a sub-division of the Faculty of Social Sciences from Chiang Mai University, Thailand. Dr. Chayan Vaddhanaphuti, the director of RCSD, and Dr. Prasit Leepreecha, a colleague from the centre, initiated our introduction to the social landscapes of northern Thailand by presenting a lecture on national development priorities and the many indigenous hill tribes which inhabit this region. From this, the travelers learnt about an alternate reality that exists in Northern Thailand apart from those seen in brochures. This was the foretaste of more to come.


On day two, we met up with staff of the Inter-Mountain People’s Education and Culture in Thailand Association (IMPECT), a people-based organisation. Here, we were enlightened on the major issues that mountain peoples are faced with. Among others, they struggle with the nationalist agendas of the government which often go against their traditional ways of life, especially in the areas of education and natural resource management.

On day three, we were given the opportunity to cycle around the city. We headed our way to the ancient Buddhist temples of Wat Phra Singh, and Wat Chideeluang where we learnt a little about the political, social and cultural significance of Buddhism in Chiang Mai and Thailand. We also cycled to a Muslim community mosque called Masjid Al-Attaqwa situated on another part of Chiang Mai to meet up with the local leaders. Religion, it would seem, is an integral factor within Chiang Mai’s social milieu and we were grateful to have been able to experience it, if only for a day. Later that evening, we were treated to various cultural performances at the Chiang Mai Cultural Centre. 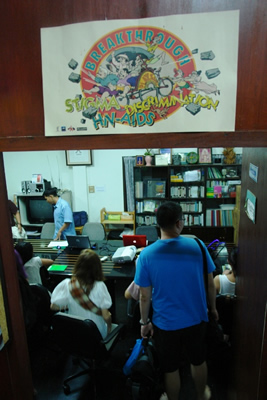 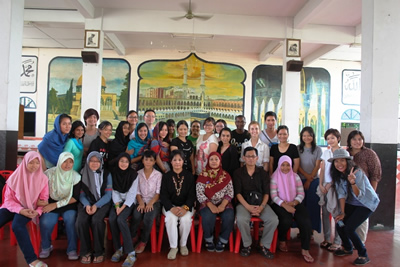 With the women of Masjid Al-Attaqwa

On day four of the study trip, we were given the liberty to explore Chiang Mai on our own. And so some of us got up early in the morning to follow the Buddhist monks who walked along the streets of Chiang Mai  in order to give devotees the opportunity to offer food and other items to them. Others chose to check out Chiang Mai’s many vibrant street markets, try out traditional Thai massage or learn more about Thai cuisine in one of the cooking schools nearby. In the evening, many of us witnessed muay thai, Thai traditional boxing or indulged in the hype of the FIFA World Cup fever by joining large excited crowds in bars to view the game on giant screens.

The next two days were the most exhausting  as the pace picked up considerably. We met up with six NGOs (non-governmental organizations) scattered throughout the city. While the distance between the NGOs meant a lot of sitting in our usual mode of transportation (the lut deng which resembled jeeps) this allowed  the travelers time to bond as well.

On day five, we  listened intently to the varied work of the AIDS Network Development Foundation (AIDSNET), Human Rights Education Institute of Burma (HRIEB), and Gabfai Community Theatre group. All of them gave us a clearer picture of the many invisible and marginalized social groups that inhabit Northern Thailand and the different strategies they use to represent their interests.

Similar lessons were learnt on day six of the trip.  Friends without Borders is a group that  draws on  popular media  to promote human rights awareness among the general public on  the plight  of indigenous communities, migrant workers and refugees in northern Thailand.

Migrant Assistance Program (MAP) addressed issues of  migrant worker  protection while  EMPOWER (Education Means Protection of Women Engaged in Re-creation)  lobbies  for the  legal and formal protection of sex workers in Thailand. These NGOs wrapped up our journey to Chiang Mai ever so fittingly as they were showed us how struggle is an emulation and a practice of hope. This left a lasting impression on all of us. 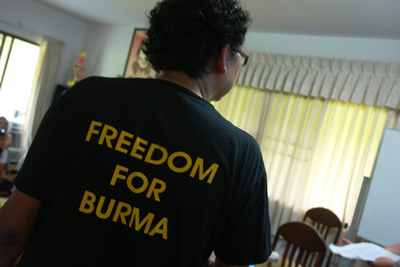 Learning more about the situation of Burma

Being theatrical at Gabfai Community Theatre

On the final day of the trip, we loaded up our suitcases for our last lut deng ride across Chiang Mai. With heavy hearts, we silently thanked the city for its hospitality and for allowing us to explore it and its people. The Chiang Mai experience was for all formal intents and purposes a study trip  allowing us to exercise our creative writing, photography and videography skills. But it  was also a journey  that made us question our own lives and its complacencies, to see the world beyond the worn-out pages of over-read books, and to write some pages of our own.

Our documented experiences can be found at http:insearchofchiangmai.blogspot.com.