Eighteen students from the School of Arts and Social Sciences were in for a surprise as they stepped onto Cambodian soil to experience culture from a whole new perspective.

The study trip to Siem Reap held between 4 to 11 July, 2008 was hosted by the Centre for Khmer Studies (CKS). The trip allowed the students to polish their journalistic, writing and organizing skills as everyone was allocated into different work groups like photography, videography, editorial and cultural teams. Their entries were posted daily updates onto a collective blog -http://insearchofsiemreap.blogspot.com/

Dr Michael Sullivan of CKS welcomed the group with an introductory session on Cambodian society and culture on their first day. After the session, the students explored the site of Wat Damnak monastery occupied by Buddhist monks and nuns. 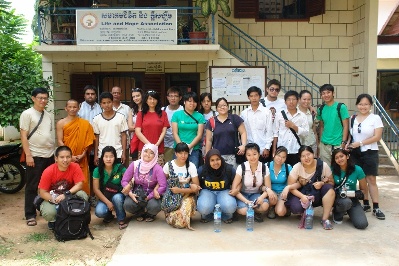 Learning about the work of Life and Hope Association 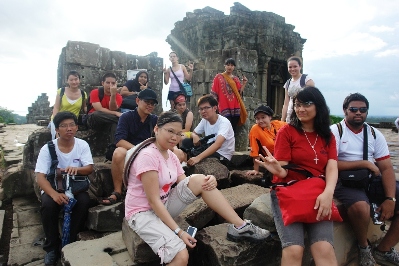 The talk by Ms. Depika Sherchan of the Centre of Housing Rights and Eviction (COHRE) on the second day of the trip highlighted housing rights as one of the most violated human rights in the country. COHRE is an international organization working to defend housing rights violated through forced evictions.

The third day saw a visit to the National Center for Khmer Ceramics Revival. This organization aims to revive traditional Khmer ways of making ceramic wares. This was followed by a trip to the War Museum where the students encountered an array of weapons used during the Pol Pot regime.

Students were free to pursue their own stories in day four, which ranged from shadow puppetry at the House of Peace, the floating village at Tonle Sap, to the views of local citizens on the upcoming general election in the country.

Day five took us back to Wat Damnak to learn more about the work of Life and Hope Association (LHA) through an interactive session with Monk Y Nol and Duong Than. LHA provides literacy education and skills training for children and teenagers. Several students continued the day with a visit to a local orphanage, Sunrise Children’s Village where they watched the orphans perform a traditional Khmer dance and presented them with gifts.

The most anticipated day was on the sixth day which saw the travelers getting up at 4 am to catch sunrise at the Angkor Wat Temple. Within the Angkor City complex, the students explored various temples including Bayon, Ta Prohm, The Elephant Terrace, and Bat Chum. The day ended with a spectacular view of the landscape of Siem Reap at Bakheng Hill. Five history students from the Royal University of Phnom Penh (RUPP) acted as guides. They provided the students with informal background insights into Cambodian history as well as helped out with translations, interviews and everyday activities.

During the trip, students braved themselves for a taste of fried grasshoppers, which oddly tasted similar to prawns. Students also enjoyed open air tuk-tuk (motorcycle taxis) rides along the outskirts of Siem Reap, something they would not have experienced in Kuala Lumpur.

“This was an amazing trip, an eye-opening experience that may only come to me once in a lifetime” said Aron Raj, former Vice President of the Communication Student Alliance (COSTA). “I was able to further develop my video expertise and train students who are interested in videography beyond the classroom environment.”

By Mindy Wong and Kemi Harahap