Nasi Bungkus Cinema (or “Packed Lunch Cinema”) began as a series of lunch-time screenings showcasing the work of Arts and Social Sciences students. Since its inception, there have been regular screenings throughout the year, with student films taking on a range of topics including subject matter closely related to units taught within the school, such as environmental concerns, issues relating to race and ethnicity, gender stereotypes, and freedom of speech. Some of the films and students have gone on to achieve great success, such as Fikri Jermadi who won the Best Short Film award at the 2009 Malaysian Film Festival, Weiyan Low, whose short film The Color of Ideas, which he made while at Monash, was screened at the Bangkok International Film Festival, Sheril Bustaman, whose Come Hell or High Water won an Audience Choice Award at the June 2014 Malaysian Shorts film screening, and Bradley Liew whose work has been shown at the Cannes Film Festival. In recent years Nasi Bungkus Cinema has expanded to include films made by local filmmakers, including works by Amir Muhamad, Woo Ming Jin, Liew Seng Tat, Dain Said, Fahmi Reza, Ida Nerina, Sharifah Amani and Khairil Bahar, who have all come to screenings to discuss their work.

“Some dreams are worth fighting for”

A young woman who lives with her strict father aspires to become a champion at the popular martial art sport silat. Yasmine is the film debut of Brunei’s first female director Siti Kamaluddin, and the first feature-length commercial film ever to emerge out of Brunei. This engaging coming-of-age story explores traditional gender roles, teenage rebellion and inter-generational struggle, as the protagonist Yasmine (played by Liyana Yus) pushes the boundaries to achieve her dreams within the middle class family setting. 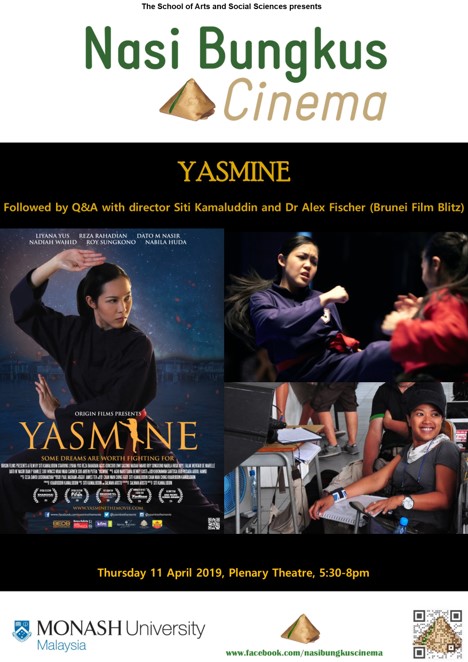