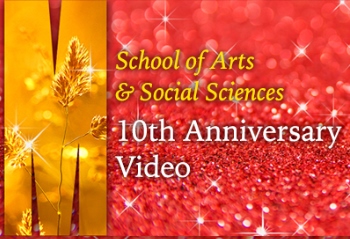 On 1st December 2018 the School of Arts and Social Sciences (SASS) celebrated its 10th anniversary, welcoming back 76 of its alumni as well as members of staff past and present. Dressed in varying shades of red (the School’s colour and the theme of the night) they gathered from near and far to remember their time at SASS and meet old and new friends. The event brought together alumni from the early days of the School while it was still grouped together with Science as the School of Arts and Sciences housed on the Sunway University campus across the road as well as more recent graduates of SASS. Founding Head of School Prof James Chin was one of three former staff who graced the occasion, together with Mr Kevin Tan (Arts Course Manager) and Ms Cynthia Ng (School Executive Secretary) who had been members of the School at the time it was founded. Senior members of Monash University Malaysia – President and Pro-Vice Chancellor Prof Andrew Walker, Executive Director Mr Ong Pang Yen and Financial Controller Mr Lucas Tong – also joined in the celebrations, enthusiastically entering into the festivities.

Homecoming was the unofficial theme of the night, brought up repeatedly by the alumni as well as Prof. Helen Nesadurai, the Head of School in her speech before dinner. Prof. Nesadurai noted that the success of the event was due to the affection and attachment its students and alumni have for SASS, reflected in the many alumni who turned up for the event, including from Sri Lanka, Singapore, Indonesia, and Australia, expressing their fond memories of their lecturers and their time at the School and at Monash Malaysia. Tim Tillack, who graduated in 2011 with a Bachelor of Communications spent a memorable year in SASS on exchange from Australia and made it a priority to come from Australia for the event. “I felt I had to come, it’s like returning home. My time here was transformative, and I wanted to come and meet my peers and pay my respects”. Indeed, this spirit of nostalgia and conviviality is readily on display in the special anniversary magazine curated by SASS to mark the occasion titled Metamorphosis, featuring stories, poems, drawings and photographs submitted by alumni and friends of SASS. 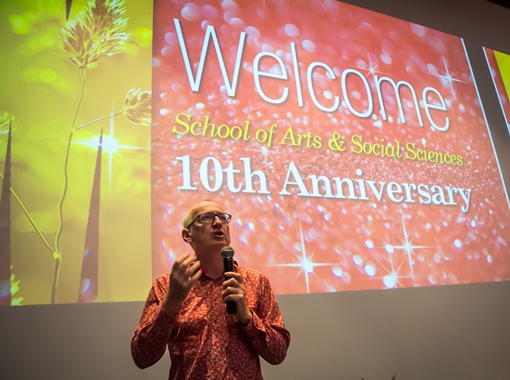 President and Pro Vice-Chancellor Andrew Walker in his speech was touched by the loyalty that the alumni have for the school, and proud of the successes they have attained since graduating from it. He thanked the alumni for coming back and staying in touch, a key aspect of expanding the network of the School and important to Monash University Malaysia’s greater goal of becoming a hub for educational and research excellence in the region. Prof. Walker emphasised that “Arts and Social Sciences are a crucial part of the fabric of society, and the plurality of thought, lived experiences, perspectives and good communication are crucial for the health of democracy”.

During dinner, guests were entertained to a program of activities designed and managed by the SASS Alumni Association that included two rounds of an online quiz for staff and alumni as well as a dance-off featuring teams of lecturers and students working together. The other chief source of fun and reminiscences was the SASS Confession Wall, featuring a live stream of anonymous messages and pictures shared in real-time by the alumni. Unsurprisingly, many of the messages revolved around favourite memories and declarations of love for various lecturers. There was also a photo wall where guests could take photos, and if they wished, with props featuring the faces of various philosophers and popular academic phrases inspired by the SASS curriculum.

In thanking those who had helped to make possible the event, Prof Helen observed that the tenth anniversary celebration was also a testament to a strong collaborative spirit in SASS that saw its academic and especially professional staff put in long hours cheerfully and with good humour to ensure that the night’s celebration would be as perfect as possible.