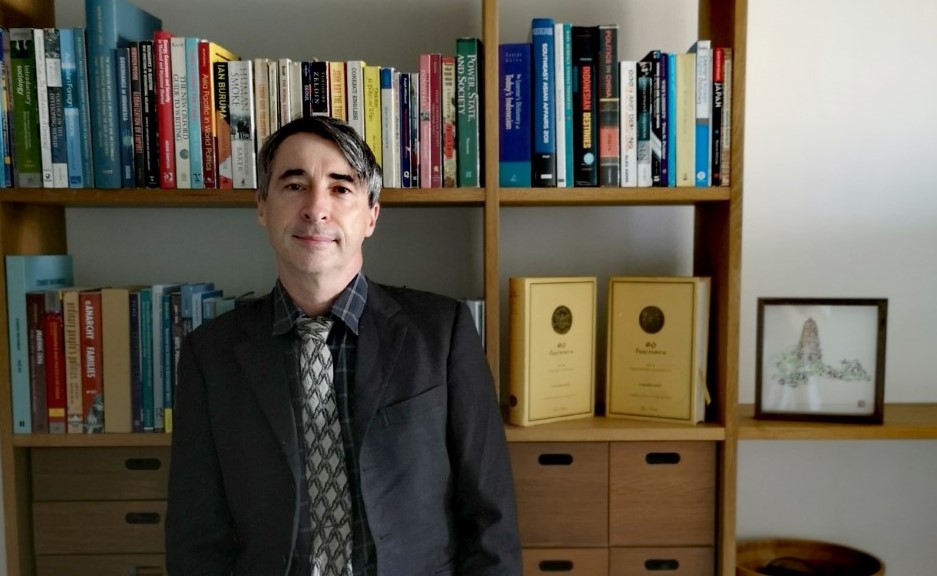 Michael Connors is Associate Professor in Global  Studies at Monash University Malaysia and Deputy Head of School (Education, SASS). He believes that university education can empower  by enabling the interrogation of existing knowledge and creating new knowledge and understanding.

He  finished high school as a young adult through correspondence classes (cassette tape classes and the exchange of notes and readings by snail mail). After working in a range of jobs typical of an itinerant he went on to study a BA at La Trobe University in the 1980s before completing a Diploma of Education (Secondary Education). He spent four years as a high school teacher in Melbourne’s west before returning to university, completing his BA Hons at the University of Melbourne in the mid-1990s and his PhD in political science at the same institution in 2000. He was fortunate to be supervised by Professors Phillip Darby and John Dryzek.

Before joining Monash Malaysia in August 2021, Michael worked as a lecturer in a number of institutions including Thammasat University, La Trobe University, University of Leeds, City University of Hong Kong, University of Nottingham, Malaysia Campus and Xi’an Jiaotong University, China. Among his service roles  are Head of Department (XJTLU),  Head of School (Nottingham), Director of Research (XJTLU), and Faculty Chair, Graduate Studies (La Trobe). He was in 2016-2017 a Visiting Fellow at the Institute of Asian Studies, Chulalongkorn University where he convened a workshop on political ideologies, commenced a translation project (Thai to English), and wrote several papers on populism, corruption and political theory.

Michael currently views his work as lying in the emerging field of global area studies. He has a keen interest in local manifestations of global moments including political events, ideas and culture. Many of his publications explore these through a study of Thailand. He also works in the area of International Relations and is especially interested in the foreign policies of Australia, Thailand and Japan, Gramscian IR, and the politics of civilisade. He currently serves on the Editorial Board of the Journal of Contemporary Asia and Asian Review.

Diploma of Education, University of Melbourne (1989)

Michael’s previous research  has explored the following topics: how western notions of political development became part of the Thai state’s apparatus of governmentality in the construction of ideal citizenship - a process he as called ‘democrasubjection’; the situated expression of political ideologies such as royal liberalism, communitarian liberalism, Thai conservatism, developmental liberalism; the nature of the state and power in Southeast Asia; critiques of development.

Translating Thai Conservatism. With Professor Ukrist Pathmanand (Chulalongkorn University). This project comprises two parts. The first is translation, and involves introducing to English reading audiences key texts that can illuminate the poorly understood dynamics of conservative thought in Thailand. The second is the interpretation of conservative politics: how to deal with misconceptions, (the confusion around Thai style democracy), the mischaracterization of key thinkers, and the motivating problems for conservative movements and ideas. An edited collection of translations, Thai Politics  in Translation: supra-constitution, monarchy and democracy (NIAS Press) is forthcoming.

Populism. How does a social movement appropriate its leader? What does it mean for a leader to be an empty signifier? Using a case study of the red-shirt movement, I explore the role of political cadre in consciously fashioning a populist leader.

Liberalisms in Southeast Asia. With Professor Mark Thompson (City University of Hong Kong) this project involves a range of researchers who are exploring local manifestations of liberal ideas. This project attempts to bring a more systematic approach - by combining the study of political ideologies with Area studies expertise - to understanding the diversity of liberal expression in Southeast Asia. Michael is specifically focusing on the recovery of competing liberal projects in Thailand. This will soon appear as a Special Issue of Asian Studies Review (Locating Liberalisms in Southeast Asia).

The politics of authoritarianism. Under what conditions do political thinkers and actors embrace authoritarian solutions? Does authoritarianism enable historical progress, or at least, how do authoritarians rationalise in this manner? (Michael have published on this theme in “Liberalism against the people” in the Journal of Political Ideologies. That piece was broad in scope and engaged with defining liberal decisionism. He is  now moving towards an episodic study of liberal authoritarian mobilisation.

Area Studies and China. This is at an early stage. How does China ‘do’ Area studies? This project will be undertaken with  Associate Professor Alessandra Cappelletti, XJTLU.

Across his career Michael has sought to bring problem-based learning to the heart of his teaching - it is something he learned to value in his Graduate Diploma of Education in another century.Now it is being revitalised in the context of digital education and blended learning.  This approach comes in various names, but fundamentally it concerns integrating scholarly analysis, theory and empirics with real-life problems. That approach means students are continually reviewing theoretical knowledge in the light of its practical application, and when that occurs in group work, there is a multiplier effect. It is no surprise that classes that engage in well-constructed role plays, policy analysis and development, public forms of writing, and other real-life assessments tend to embed deeper understanding among participants. Problem-based learning is at the heart of all  of Michael’s teaching. In every module he teaches, he builds  in assessments that enhance theoretical content by applying it. He finds that students rise to the challenge of engaged problem solving and find real purpose in completing assignments when they encounter participant forms of assessment such as role-plays, group work involving team policy development, application for funding for development projects and learning diplomatic forms of communication.He also actively employs primary sources or classic texts in classes – regardless of discipline. The joy of learning from the original and rediscovering its freshness or making connections from the original to the contemporary situation is exhilarating. Grounding study in crucial moments in the development of a discipline rather than endless secondary readings of a highly jargonistic nature equips students to be better readers of scholarly literature.Michael  has taught in the disciplines of history, international relations, political sociology, area studies, political theory, global studies and international development.

Connors M.K and Mark Thompson (Under Review). Introduction: Locating Liberalisms in Southeast Asia, submitted to Asian Studies Review as an introduction to the proposed Special Issue.

Research and other grants

2019-2020 100,000 RMB HSS grant on China Outside Project XJTLU (with colleagues in School of Humanities and Social Sciences), to administer small grant research on the titular theme and hold workshop)

2010 Australian Academy of Social Sciences and the Institute of Human Security, La TrobeUniversity , $7000, to fund fieldwork and research assistance on human security in Thailand for 2011.

2008 Department of Foreign Affairs and Trade, Australia-Thailand Institute, $22, 000 (with supporting funds from La Trobe University of $4000) – to facilitate photographic exhibition and film on Thai south.

2007 Department of Foreign Affairs and Exchange, Australia-Thailand Institute, $24, 000 (with supporting funds from La Trobe University of $2000) – to facilitate exchange visit of Thai Muslims to Australia in 2007.

2002 – co-author with Professor Duncan McCargo of a successful bid for Department for International Development funded link between the University of Leeds and the Prince of Songkla University, Thailand.

2001 British Academy of the Humanities and Social Sciences, Small Grant for a project on ‘Rediscovering Liberalism in Thailand’ £ 2800.

‘A ruling elite’s interaction with an externally promoted policy reform agenda: the case of forestry under the second Kingdom of Cambodia, 1993-2003’, La Trobe University. Dissertation published as a monograph.

‘As if it was something spoken by a friend’: Political public relations and digital vote-canvassing networks via Facebook’, University of Nottingham, Malaysia Campus.

The Quasi-Populist Mobilisation of Conservative Malay-Muslim Social Movement: A Study of Perkasa and ISMA, 2008-2017. University of Nottingham Malaysia.