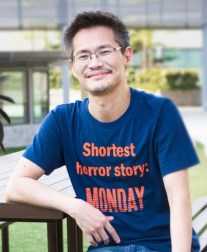 Associate Professor of Literature
School of Arts and Social Sciences

Andrew Ng is Associate Professor in Literary Studies and the Chair of Postgraduate Studies at the School of Arts and Social Sciences, Monash University Malaysia. He received his PhD from the University of Western Australia, Perth, Australia. He specializes in Gothic and horror narratives, and is particularly interested in a framework that compares the related genres’ Eastern and Western manifestations.

His current research looks at the literary tradition of Asian monstrosities - from the Middle Eastern ghoul and the demon lord, Ravana, in the Ramayana, to the monstrous feminine of Southeast Asia and the bakeneko of Japan, among others - and how their representation and significance have been transformed and updated in recent history. His most recent monograph is Women and Domestic Space in Contemporary Gothic Narratives: The House as Subject (Palgrave, 2015).

He serves on the editorial board of the Anthem Gothic Series and regularly reviews for the journal, ASIATIC: An International Journal of asian Literatures, Cultures and Englishes

Andrew Ng’s primary research area is in gothic/horror studies that encourages a lateral approach in reading and theorizing literature, and comparing the genre’s Eastern and Western manifestations. He is interested in tracing the tradition and aesthetics of the gothic in postcolonial and Asian American narratives, as well as exploring the formal conventions of horror in evoking both tactile and emotional experiences in the reader. Lately, his work has also included a focus on space and spatiality in the genre, especially in terms of its representation of how lived space in gendered.

Another of Ng’s specialization is anglophone and sinophone Malaysian literature, particularly its contemporary development and increasing turn to the transnational without relinquishing a local focus. His publication, Intimating the Sacred: Religion in Anglophone Malaysian Fiction (HKU Press, 2011) - a study that considers the imbrication of literature, religion and nationalism - remains the only full-length monograph on the subject to date, and he has organized a couple of scholarly events centered on the current state of Malaysian writings whose contributions were/are to be published as special issues of peer-reviewed journals.

More recently, Ng’s focus on horror studies has widened to include paranormal media (particularly the documentary and reality-TV) and the graphic novel. He is particularly interested in the way these media deploy formal conventions and strategies specific to them to represent the horrifying and the horrific (the supernatural, violence).

A study comprising a series of related essays, Ng’s current monograph-length project focuses on individual traditional Asian monsters - such as, to name a few, the Malaysian pontianak, the demon Lord Ravana from the Ramayana, the Japanese feline yōkai (or monster), the Middle Eastern flesh-eating ghoul, the Chinese fox-fairy, and Sun Wukong from Journey to the West - and how their function and significance have been transformed and updated in recent cultural history.

Together with Drs. Katarzyna Ancuta (Chulalongkorn Univ., Thailand) and Mary Ainslie (Univ. of Nottingham, China) Southeast Asian Gothic, Ng is also editing a volume on Southeast Asian gothic. The various countries of the region will be represented in this collection, whose essays will cover both literature and film.

A recent project undertaken by Ng is a symposium on the state of Malaysian Literature in the twenty-first century. Jointly organized with Professor Muhammad Quayum of the International Islamic University of Malaysia, the event brought together scholars from four countries (Singapore, Australia, Japan and Malaysia) to discuss Malaysia’s literary development in the present era especially in relation to its confrontation with transnationalism, the state’s ongoing policy on language, and the country’s multi-ethnic situation, among others. A special issue of the peer-reviewed journal ASIATIC scheduled for December 2018 will publish the essays, which cover literature written in English, Malay and Chinese, that resulted from this symposium.

Aimed at students who care about writing as a craft, the Writing Minor also prepares them to be job-ready through the third-year unit whereby students will individually develop a portfolio collecting their writings across a range of genres that could be used for employment seeking purpose after graduation. The Minor is organized according a sequence of units meant to help students hone their strength gradually and systematically in the craft of writing.

Ng has also written a couple of units specifically for the Malaysian campus; the first, Postcolonial and Diasporic Literature considers the literary productions of nations once colonized by the British, and how they reflect the transition and transformation of these nations and their people in the postcolonial era. It also focuses on writings in diaspora with an emphasis on what they reveal about hybrid identity construction, liminal belonging, nostalgia and other issues related to the transnational experience. The other unit, Film Genre, which is also a core in the Film Television and Screen Studies Major, looks at issues of genre from a theoretical, social, historical and comparative perspective in both Western and non-Western cinemas.

Besides the Writing Minor, Ng teaches a methodology class on discourse analysis at both Honor’s and postgraduate levels. He has also helped develop units in the teaching of literature for other local institutions of higher learning.

The Poetics of Shadow: The Double in Literature and Philosophy. Stuttgart: Ibidem-Verlag, 2008.

“Sisterhood of Terror: The Monstrous Feminine in Southeast Asian Horror Cinema”, in The Companion to the Horror Film. Ed. Harry Benshoff. London: Blackwell, 2014. 442-59.

“Self-Fragmentation, Diseased Landscapes and Other Enigmatic Engagements: American Gothic and the Literatures of South and Southeast Asia”, in The Companion to American Gothic. Ed. Charles Crow, London: Blackwell, 2014. 519-32.

“The Monster as Ethical Mirror: The Example of Monkey from Journey to the West”. Listening: Journal of Communication Ethics, Religion and Culture, 52. 3 (2017):153-63.

“Between Subjugation and Subversion: Ideological Ambiguity in the Cinematic Mae Nak of Thailand”, Horror Studies, 5.2 (2014): 171-82.

“Psychoanalysis and the Gendering of Architecture in Robert Westall’s The Stones of Muncaster Cathedral”. Children’s Literature Association Quarterly, 39.3 (2014): 413-32.

My areas of research and supervision include Gothic and horror narratives (Western and Asian), postmodern writing, postcolonial literature, space and spatiality in literature and film, and literary theory

Decolonizing English Language Pedagogy: A postcolonial study of teaching-learning curriculum and praxis in Bangladesh and Malaysia.

Materiality and Architecture in the novels of Virginia Woolf

Serving up ethnicities: Chinese celebrity chefs and the search for identity

Destabilizing Realities: Black humour in the fictions of Heller, Pynchon and Vonnegut

Underhill's mysticism: the nature and development of spiritual consciousness