Building the foundation for the Future Internet 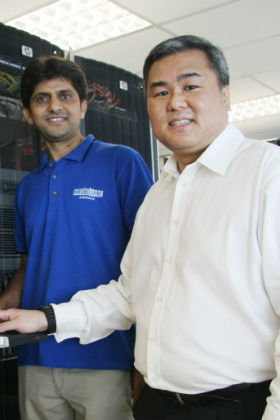 Dr. Lua at his future Internet research testbed equipment hosted in the Monash Cloud Data Centre and with him is his Tutor, Mr Khalique.

Going online and staying connected to the happenings around the world has become a way of life for the majority of people today, thanks to the invention of the Internet more than two decades ago. However, not many people realise that the Internet, in spite of its seemingly endless capabilities, was not built to support the volume of secure multimedia data transfer in real time and mobility that today’s applications require.

“But the Internet infrastructure was not actually built for real time, large multimedia data transfer in secure and mobility manner,” said Dr Eng Keong Lua, Senior Lecturer and Director of the Higher Degree by Research program at the School of Information Technology, Monash University Sunway campus.

The Internet was originally set-up as a military collaboration network in the United States for the purpose of data transfer in text form at a low priority constant transfer rate, said Dr Lua.

“That’s how it started but then it slowly evolved to people sending short messages via email, and bulletin boards which was set-up as the start of the World Wide Web,” he said.

Video transmissions, if any, were sent via the back-end and not in real-time.

Dr Lua said that because of the way the Internet infrastructure was designed, it can never fully cater for multimedia applications with security and mobility requirements.

“Right now, to enjoy high-quality and secure real-time multimedia services, you have to pay a high price for the telecommunication operators to configure the routers to provision the networking bandwith resources and security measures. Otherwise, you have to make do with low quality services that are free and insecure,” he said.

Such free services include Skype, which is based on peer-to-peer, an intermediate technology, said Dr Lua who has also co-authored a book on peer-to-peer technology – “Peer-to-Peer Networking and Applications”, Morgan Kauffman, ISBN 0-12374-214-5, http://www.p2pna.com/.

Instead, Dr Lua believes that the only way forward is to have a clean slate by changing the infrastructure of the Internet.

“The Internet may be fine now but in the future, when the next “Facebook”  service comes up or a new social networking application emerges, it will definitely be large multimedia real-time applications. When this happens, our existing infrastructure will not be able to cater to them.”

Starting fresh would require research into the area of software defined networking, with the ultimate aim of creating a flexible, configurable design of networking protocols to be deployed real time and in a secure manner.

“We can accept the car because it still takes us from Point A to Point B.

“But what if we design a car that can flexibly adapt to precisely what you need, and you only pay for what you require. If we can design a car that allows you to configure and adapt to who you are and what you want, such as traffic conditions, gender, age and so on, surely that would be beneficial,” he said.

Likewise for the Internet, to support the increasingly high demand for real-time, large multimedia transfer and catering to security and  mobility, a new infrastructure needs to be in place to support flexible configurations and designs of new Internet routing protocols and infrastructure.

This new Internet, or as researchers term as the ‘Future Internet”, would allow end-users to enjoy real quality multimedia data transmissions with security and mobility and  without having to pay high rates, said Dr Lua.

His passion for his research has also indirectly been passed down to his students at Monash University, where Dr Lua has revamped a course called Network and System Administration based on his experiences with the future Internet.

“This course can be very dry and boring, especially when you just face networking equipments or computers and you only type commands and don’t know what’s happening behind it,” he said.

When he took over the course last year, Dr Lua along with his tutor,  Mr Shaikh Abdul Khalique redesigned the laboratory and assignment work to get students to configure a service for certain Facebook social networking applications, similar to what a telecommunications operator would be doing in real life.

“By doing this, the students can see the results of all the things they do in the back end. Additionally, many students realise that the current facility we have is really inflexible and they begin to question why and how we can change it,” he said.

The revamp has been nominated for a teaching excellence award, and Dr Lua said he feels a sense of satisfaction in being able to bring real-world research problems into the classroom.

“If a student just learns rote learning without experiencing how to provision a networking resource service, it’s just book knowledge only.

“When they are able to see the link and realise the limitations of the Internet, perhaps this will trigger some interest for some of them to one day embark on research in the same area.

Dr Lua, who has extensive industry and research experience in the United States and numerous Asian countries, said his interest in the area of future Internet architecture was spurred by what he believed to be a real need for the future.

“As researchers, we have to look at the future and its needs. We can’t just choose to do a research topic of our interest, but our work should be about solving future problems and filling in the gaps. That’s what I believe we are doing here with designing the Future Internet,” he said.

He said being a part of history-in-the-making was a strong motivation as well.

“Likewise, as researchers first embarked on this work in 2005, there’s a feeling of excitement that we will one day be the fathers of the future Internet.