At the top of the DNA sequencing game 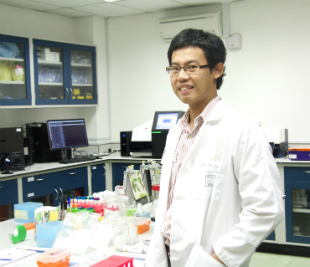 The MiSeq Personal Sequencer located at the Monash University Malaysia Genomics Facility is capable of performing this and biotechnology students who learn to use the solutions and gain the experience using them can go far today.

Dr Gan Han Ming, research fellow at the Monash University School of Science, knows all about being ahead of the pack.

He has been using the MiSeq Personal Sequencer for a few years now. He started using it when he worked at ScienceVision, the sole distributor of this system, for two years.

“Biotech students who have exposure to next-generation sequencing will know that nothing is impossible. When they go out to work and face challenges, they will know what can be done with this technology,” says Gan.

Gan has been working with his former professors at Rochester Institute of Technology (RIT) on research into the bacteria that cause grape tumours.

It was while he was back in Denver, Colorado, in 2013 to attend a conference that his research into grape bacteria was revived.

He was having coffee with his former supervisor from RIT when the discussion turned to grape bacteria.

At a Starbucks cafe over coffee, they decided to revive an old project and use the MiSeq system. While everyone was studying the main plant pathogenic bacteria – Agrobacterium, Gan decided to find out what other bacteria is in the grapevine.

“The theory is that it's not just the Agrobacterium that causes the crown gall disease. Maybe there are other kinds of bacteria that contribute overall and they work as a group but most of the time the spotlight is given to the Agrobacterium,” says Gan.

Gan and his peers have been extracting the DNA from the grapevine and sequencing them on the MiSeq system.

What they are currently focusing on is the predominant 16S ribosomal RNA (rRNA) gene, which has been well-established a long time ago for the identification of bacteria and for which there is a lot of data in the public database.

Their initial result, however, was not very promising. Nearly all of their dataset consist mainly of  16S rRNA from the plan chloroplast, which naturally exists in abundance in all green plants.

“So, we came up with a method to target only the bacteria,” says Gan.

They modified the lab protocol to ensure that as much as possible the chloroplast sequence is not being recovered.

Although they started with 10 samples, this soon grew to 40 samples from all over the world after they demonstrated that the modified protocol worked.

The countries Gan is now collaborating with are the US, Hungary and Japan. He is hoping to get samples from Australia as well.

“Utilising this kind of cutting-edge technology, you can sequence a lot of samples and find out what other bacteria is there.

“So, in the future if there is a certain outbreak, you can tell if it is bad or curable, and what other bacteria is in there besides the main positive agent.

“On top of knowing which bacteria is there, you can also predict what the bacteria is capable of doing. The vineyard owners can check if their grapes are healthy and what bacteria and infestations to watch out for.

“Crown gall disease will really affect the growth of the grapes. Imagine, you're supposed to grow healthily, but then there's one part of your organ taking all of the nutrients and making a specific kind of sugar. It won't grow well. So, either the productivity goes down badly or it just dies off. That is the big implication,” says Gan.

According to him, while biotechnology is not new, using the next generation sequencers is. They make everything faster and more interesting.

“We are in front of the game right now,” says Gan, smiling.

Now, he and his counterparts are looking at the new samples obtained this year (2014) to see if there is a difference to what was found in 2013.

They are looking for certain universal bacteria present besides Agrobacterium, and which are not affected by seasonal changes.

“This field that I am studying – genomics and bioinformatics – is not readily available in Malaysia. This particular niche – next generation sequencing – is rather new. People nowadays only buy the next generation sequencer for research purposes but in Monash we want to expose students to it. The application to agriculture and aquaculture is unlimited. If you have an idea, and you know how to use the system and analyse data, you've got yourself something.

“I graduated with a PhD and with no knowledge of next generation sequencers. Apart from my knowledge in microbiology, everything else I learned from scratch.

“It's interesting in the sense that it challenges you – how far you are willing to go to learn all these things. The benefits are great. Once you learn this, you are on top of the game in biotech. You can do things that nobody else can do. That knowledge adds to your value as human capital,” says Gan.

For more information on the School of Science at Monash University Malaysia, please visit www.sci.monash.edu.my/.