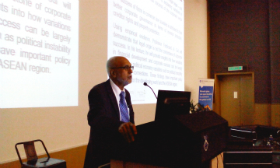 Professor Ferdinand Gul talks about the role of politics in market development.

Legal frameworks may play a part in a country’s economy, but its political climate wields more influence over stock markets, said Professor Ferdinand Gul, Monash University Malaysia’s Professor of Accounting and the Donald Cochrane Chair of Business and Economics at Monash University.

“The question is ‘how ‘friendly’ is the politics in a country?’ You can spend lots of money fixing your legal system but you will not go very far,” said Prof Gul at the Sir John Monash Distinguished Public Lecture at Monash University Malaysia on 25 August. “What a country does with its legal tradition and system turns on politics. In my view, if you put law and politics together, politics trumps law.”

However, quoting other research articles as well as his own, Prof Gul showed that the share market responded to political changes irrespective of legal origins. For example, when an announcement is made of an appointment of a company’s board member with political connections, its share prices increases. When Italian prime minister Silvio Berlusconi and former Indonesian President Suharto resigned, their country’s share markets responded negatively; indicating that many firms had political connections. 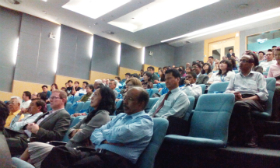 Benefits such as government support in terms of tariffs, contracts and softer budget constraints are reasons firms seek out political connections, while the costs include rent-seeking activities, insider trading, less transparency for shareholders and poor quality of directors. Such firms account for up to 28% of Malaysian companies.

Prof Gul believed that the question of legal origin versus political economy influencing financial outcomes is an important one in the light of globalisation and cross-trading. He pointed out that political stability was crucial in economic growth.