Heart attacks: Gone with the century?

The fact that the order of people’s first presentation of heart disease is either dying or having a significant complication is concerning, and what’s becoming increasingly important is that heart disease is no longer a disease of affluence. It has spread to the point where it no longer discriminates by age, gender or socioeconomic background. Heart disease is a global challenge that has spread over all variants.

In the fourth and final Sir John Monash Lecture for 2019, Professor Dr Steve Nicholls, Professor of Cardiology at Monash University and Director at both MonashHeart and Victorian Heart Hospital, presented his lecture on “Eradicating Heart Disease: A Global Challenge for the 21st Century” – a title he believes could be realised by communities, governments, researchers, medical communities and patients.

“From a western nation’s perspective, the good news is that we know how to prevent the disease, we have treatments for it and what we have seen in affluent countries over some time is that coronary mortality rates are declining. 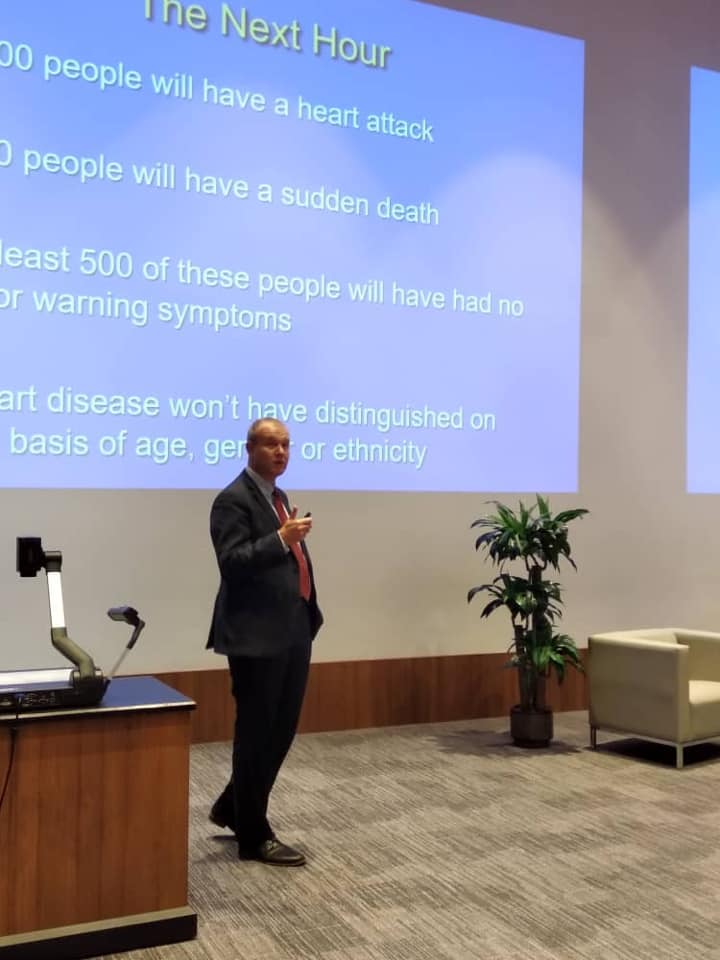 “The bad news is we now have a mortality rate similar to cancer, meaning we have done a lot better, but we are still in a bad place. If you look at a global perspective, the sobering reality is we have seen the rise in global coronary mortality, and that is largely due to the fact that obesity has become a global pandemic.

“We have seen Diabetes Type 2 appear in every part of the world, and that is going to drive a whole range of risk factors that resolve in a much higher rate of premature and aggressive heart disease,” he said.

Coronary disease is also seen more often in hospitals around the world, regardless of the country that you are in and even in countries that were previously not seen in before. And there is a cost that comes with that, not just in the morbidity and mortality that happens to the individuals, but in social and economic cost. Cardiovascular disease is the main drain of public healthcare expenditure in many developed countries in the world.

In his lecture, Professor Nicholls discussed the ongoing efforts that are underway to determine the optimal approaches to tackling heart disease from the perspective of individual patients to large populations. Among the heart conditions he tackled included rheumatic heart disease, heart attack, heart failure and atrial fibrillation, which gave a sense of what we know about these conditions and what we are doing to treat and prevent it.

Ultimately, what do we need moving forward? Professor Nicholls highlighted several public health challenges that need to be dealt with, namely:

“Individuals need to take responsibility for their own risk of heart disease. People need to know their numbers. Every adult needs to be screened in their 20s; they need to know where their cholesterol and blood pressure levels are and if they have diabetes.

“We need to promote the need to seek medical attention for chest pain. If you have chest pain and experiencing a heart attack, time is essential, and the quicker you get to the hospital, the faster you get lifesaving treatment and medication.

“We also need more community access to defibrillators which we have seen more of it in public spaces, and everyone should know CPR,” Professor Nicholls emphasised.

He pointed out the massive equity problem in the world where individuals who need it most often have the least access. For that reason, inexpensive and accessible drugs are needed for those who are most likely to benefit from its use.

There is also a need to develop new drugs with a regulatory framework that facilitates bringing safe and effective drugs to clinics quickly. It doesn’t help if it takes 20 years for a new drug to be brought to clinics and it doesn’t help if the cost is made out of the affordable range.

“We need better ways to develop drugs that will come to the market quickly and in a more cost-effective approach. We also need to continue to develop safe and minimally invasive procedures.

“I truly believe in 20 years’ time, very few individuals will have major cardiac surgeries. All forms of cardiac surgery that requires aggressive treatment will probably be applied over a catheter and surgery will be reserved for a small number of highly complex forms of heart disease,” he said.

There is so much to learn about how to apply new technologies far more effectively, which remains an enormous challenge. Also, how can we individualise therapy by using new markers such as genetics or blood to personalise the treatment of heart disease?

At the end of his lecture, Professor Nicholls introduced the Victorian Heart Hospital, Australia’s first heart hospital built in partnership between the Victorian Government, Monash Health and Monash University. The hospital will significantly expand both the existing capacity and models of care and enable a flexible and proactive approach to new treatment paradigms and rapidly evolving technology.