Harnessing a virus to fight cancer

The word “virus” carries a negative, even frightening, nuance for most people. The most abundant organism on our planet, some viruses are even known to cause cancer—one of the leading causes of death worldwide. But did you know that viruses can be used to treat diseases including cancer?

In the last Sir John Monash Lecture, Professor Datin Paduka Dr Khatijah Yusoff shared about promising research on the Newcastle disease virus (NDV), a poultry virus that could be used to treat a range of cancers.

Professor Khatijah is an award-winning virologist at Universiti Putra Malaysia’s Faculty of Biotechnology and Biomolecular Sciences. At the end of her lecture, “Going Viral: Translating Newcastle Disease Virus into a new therapeutic agent for humankind”, she also reflected on current issues in science. 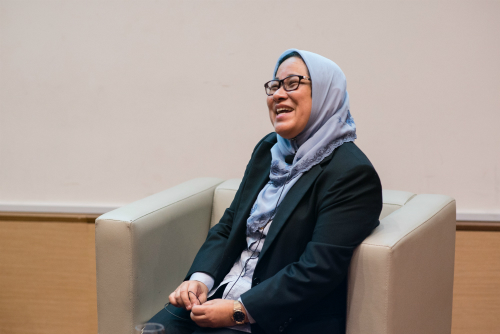 Promising results with the Newcastle virus

“My story today,” explained Professor Khatijah, “is about how the bad guys can become good in our war against cancer.”

Despite cancer’s tremendous burden on humanity — worldwide, 1 in 5 men and 1 in 6 women develop cancer in their lifetimes — mainstream therapies for cancer are limited. Cancer cells are also known to develop resistance to present treatments. Hence, the need to explore virotherapy, an approach that reprograms viruses into therapeutic agents to treat diseases.

Professor Khatijah’s most prominent work revolves around the Newcastle disease virus, particularly the Malaysian strain AF2240, which was isolated in the 1960s. NDV, first isolated in 1926 in England and Indonesia, can infect nearly all types of birds.

However, the virus is not particularly harmful to humans, causing only mild flu-like symptoms, conjunctivitis, and laryngitis. It does not harm normal cells but can be used to break down cancer cells.

“In recent years, my attention has been diverted to the oncolytic capacity of NDV,” said Professor Khatijah of her current research. “The advantages of NDV include the ability to replicate selectively in tumours, to directly kill cancer cells it infects, and to elicit a systemic immune response to cancer.”

Clinical trials with most promising results using NDV are currently underway. Many have been conducted in patients with advanced disease or no other therapy option. “The general consensus is that NDV is safe, and some patients demonstrate positive responses,” Professor Khatijah reported.

For instance, in one study of NDV therapy on breast cancer, those with NDV therapy showed dramatic post-surgery survival rates compared to those who did not receive NDV therapy.

There are limitations to the use of this therapy.

“Although some individuals respond very well, there is great variability across patients, across cancer cells. One of the reasons for variation is the development of persistency of infection: More often than not, the viruses infect the cancer cells but some cancer cells survive the infection. These persistently infected cells are like time bombs with the ability to rapidly expand into persistent tumours, and we don’t want that to happen. Our main aim now is to ensure that the surviving cancer cells are killed.”

How can these persistent cells be killed? Either by understanding the mechanism of resistance, or by using genetic engineering to create recombinant NDVs which kill cancer cells effectively.

Professor Khatijah and her colleagues are trying to understand why persistent infection occurs. “We are now exploring ways in which we can modulate the gene expression of crucial genes to reverse the persistency of infection. And we still don’t know the exact mechanism of action in which the virus selectively targets cancer cells.” So far, however, they have investigated the AF2240’s effects on a whole range of tumour types—with a focus on colorectal and bladder cancers—and identified clues as to how the virus and cancer cells interact.

“Also, in our lab we have developed a reverse genetics system to produce a recombinant NDV strain.” The recombinant strain is armed with various immunostimulatory genes that help to enhance cancer-killing.

Currently, Professor Khatijah and her colleagues are working to assess the effectiveness of these genes. They have compared the recombinant NDV against wild-type NDV. In their study using mice with tumours, mice exposed to the recombinant strain had the smallest tumours. “These are really exciting results,” she says.

Professor Khatijah concluded the sharing of her research by noting that “one of the greatest challenges is not a scientific one, but the cultural acceptability of using viruses to treat cancer.”

After 40 years in research, she feels that most of the challenges affecting humanity cannot be solved by the scientific enterprise alone.

Contemplating the theme of “Going Viral in the 21st Century”, she lamented that something more threatening to humanity than biological viruses is “the corruption of knowledge and the corrosion of ethics”. For instance, we see this in fake news and the rise of “alternative information”. A study by MIT on fake news revealed, alarmingly, that lies are 70% more likely to be retweeted than truth, because lies seem to be more interesting.

As a result, she says, “The anti-vaccination movement is giving rise to infections that previously were thought to be eradicated or close to being eradicated.”

Professor Khatijah wonders if the loss of trust in science may have resulted from a hijacking of science’s original purposes — which were “to improve the quality of life and the environment, create wealth, promote peace and knowledge.” As a scientist, she feels it is necessary to self-reflect and ask: “Does science serve scientists or humanity?”