Are women really that different from men? Professor Ishwar Parhar, Jeffrey Cheah School of Medicine and Health Sciences’ Head of Neuroscience and an internationally recognised neuroendocrinologist, says that the key difference between the brains of men and women is the exposure to testosterones and estrogens during fetal development.

Prof Ishwar spoke on three major areas - biological basis for sex in the brains, sex differences in neuropsychiatric and neurodegenerative diseases, and the reproductive axis and ageing. Prof Maude Phipps and Prof Ishwar during the question and answer session.

He also pointed out that the differences in neurodegenerative and neuropsychiatric diseases among men and women differ rather largely. More women are diagnosed with Alzheimer’s disease, depression and post-traumatic stress disorder whereas men tend to suffer from schizophrenia, autism and Parkinson’s disease.

With the use of new brain imaging techniques and natural bioidentical hormones, this brings about valuable insights and possible cures to neurodegenerative and neuropsychiatric disorders. Bioidentical hormones are plant-based hormone substances that match the molecular structure and functionality of human hormones. Therefore, the body is able to recognise them, enabling them to bind with the same receptors as their human counterparts. 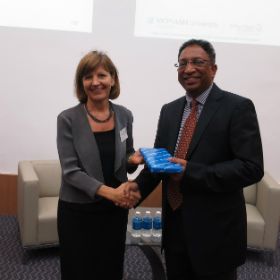 Based on the findings, it is reasonable to hypothesise that sex hormones play an important neuroprotective role against neurodegenerative diseases, and that the replacement of hypothalamic hormones (GnRH) with bioidentical hormones would be a good choice to overcome these diseases in the future.

The Sir John Monash public lecture series provides Monash University Malaysia an opportunity to engage the community in Malaysia and the region, through the promotion of leadership in key areas that are strategic to the development of this region in the 21st century. The public lecture series covers a wide range of contemporary and multidisciplinary topics presented by high profile thinkers, international leaders, policy makers, corporate leaders and leading scholars, distinguished in their areas of expertise and whose work have made significant impact on the global community.