Dengue; why more mosquitoes could be good for you An EDP collaborator in Vietnam releasing adult Wolbachia-infected mosquitoes into the wild.

Dengue has reared its ugly head again in Malaysia, affecting a whooping 76,616 people this year, an increase of 239% over the 22,602 cases reported last year. With 146 deaths as of September 27 and counting, it would seem that fogging and repeated warnings of environmental cleanliness are of no avail. Are there other solutions?

Prof Scott O’Neill, Monash University Dean of Science and the program leader of the Eliminate Dengue Program (EDP), stumbled upon the the Wolbachia’s inhibiting function on dengue viruses by accident. Wolbachia is a bacteria found in up to 60% of the world’s insects. When injected into Aedes aegypti mosquitoes, the bacteria greatly reduces the transmission of dengue viruses.

At the Sir John Monash Distinguished Public Lecture in Monash University Malaysia on 30 September, Prof O’Neill explained that his EDP researchers in Vietnam found that when these Wolbachia-infected mosquitoes were fed the blood of patients with all four strains of dengue, the samples taken from the mosquitoes’ saliva and abdomen a few days later showed that the virus had been blocked.

As it turns out, infected mosquitoes could easily spread the bacteria to non-infected ones, and over a span of three months, a whole mosquito population would have Wolbachia. The presence and effect of the bacteria were not diminished after many years, as found by researchers who caught the mosquitoes four years after initial release in the same area. Better still, the bacteria has no known effects on humans.

So convincing is the research and results that EDP is funded and supported by the likes of the Bill and Melinda Gates Foundation, the Australian government and the Brazilian government among others.

Currently, the EDP team has released adult mosquitoes injected with Wolbachia in communities in Australia, Indonesia and Vietnam. 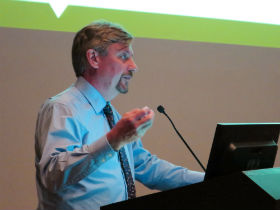 Prof O’Neill believes that his method could work hand-in-hand with vaccines to eradicate dengue completely. “Using a predicted epidemiological impact model done by academics at Imperial College, vaccines would reduce the number of cases but not stop a dengue outbreak because not all the population would be vaccinated. With the Wolbachia method, it would eliminate the disease for about 40 years, but it will come back when our future generations have no immunity to dengue. However, with the Wolbachia method and vaccines, we could eliminate it completely,” he said.

Using mosquitoes in tackling dengue is not a new phenomenon, Oxitec has done it before with transgenic male mosquitoes that carry a dominant lethal gene which, upon mating, would render female mosquitoes (the ones responsible for spreading dengue viruses) flightless.

However, Prof O’Neill revealed that when these genetically modified (GM) mosquitoes were released in Malaysia in 2011, there was a huge public backlash. “There are groups out there that target GM research, which is a shame because doing something like this is a much greener approach than spraying toxins in the air,” he said.

Knowing that public receptivity is crucial to his program’s effectiveness, the EDP team engages in active community engagement through advertising, media events, town hall meetings, social media and such.

“Most messages around the world about dengue are ‘kill the mosquitoes, don’t let them bite you’ but here we are releasing mosquitoes that are going to bite you and your children,” he joked. Hence, half the battle is convincing communities. Surprisingly, the communities that live in the areas of the EDP mosquito releases, has responded positively.

Part of the method’s appeal is cost efficiency; given time, the mosquitoes would breed and spread Wolbachia on their own compared to consistent fogging or spraying of insecticides. Currently, Prof O’Neill’s concern is how to “scale-up” on an international level, seeing that Aedes aegypti mosquitoes are not the free-roaming types to fly out of their homeground. This has meant that scientists needed to seed mosquitoes vigorously over a span of 2 to 3 months to cover a specific area. These days, they aim to get schools involved instead.

“We partner with schools so that the Wolbachia-infected mosquitoes would be released by the community itself instead of scientists,” he said, adding that eggs would be given to school children to be hatched and released as part of their science curriculum.

Prof O’Neill admitted that it would take years before a global program would become a reality, but he could see light at the end of the tunnel. “I think the issue of dengue will get worse before it gets better, but there is cause for optimism in the future,” he said.