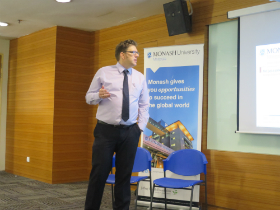 In the eighth instalment of PechaKucha for the year 2015, two academics stood up to the challenge of briefly educating the audience of some priority areas in their individual researches within a limited time frame of six minutes and 40 seconds.

The first speaker, Associate Professor Marco Buente from the School of Arts and Social Sciences, began his presentation on the Burmese Spring with the remark that Myanmar lacks a number of prerequisites for a stable democracy to evolve, as it is one of the poorest nations in the Asean region and had been the longest ruling direct military regime in the world.

“By 2011, roughly 2000 political prisoners had been freed, including the likes of Aung San Suu Kyi, as well as other activists, and in the last four years, the world has seen a wave of liberalisation within the nation,” he explained.

He added that there had also been a tremendous liberalisation seen in the press and the Internet, noting that it is now up to par with Malaysia. However, he mentioned certain drawbacks of this sudden freedom such as Ultra-Nationalist groups, anti-Muslim sentiments and hate speech on the Internet among other concerns of the progress.

He also touched on the recent Rohingya situation in the region as an example, and the violence against this community because they are not regarded as citizens of the 135 ethnic groups recognised by Burmese government.

In conclusion, Assoc. Prof. Marco opined that Myanmar will be lost in transition since the military is basically guarding this entire process, and that does not represent democracy.

From School of Engineering, second speaker Professor Ponnambalam introduced the audience to the complex dimension of Algorithms in Nature for Optimisation. 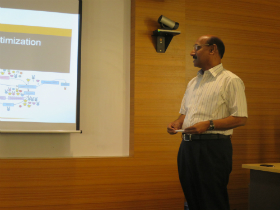 Though a niche topic, Prof. Ponnambalam provided diagrams, charts and examples of daily activities to help paint a clearer picture about the Travelling Salesman Problem (TSP), applications of TSP and then Genetic Algorithm and Particle Swarm Optimisation to solve these problems.

“NASA’s human-competitive evolved antennas is one success story as it was designed using Genetic Algorithm and Genetic Programing, and because the design is a comparatively conventional one, when it was proven, they employed it,” he said explaining that there were many other aspects to it to read into and understand.

He concluded with a note that there are many nature-inspired algorithms available, not only to solve TSP, but used for planning, scheduling, logistics, supply chain, and manufacturing problems as well.

PechaKucha, which means ‘chit chat’ in Japanese, held once a month, is a series of lunchtime talks organised by the Professors Advisory Group (PAG) that feature a certain number of speakers each time. The concise and fast-paced talks introduces the audience to a range of disciplinary areas covered by Monash University Malaysia’s academics.