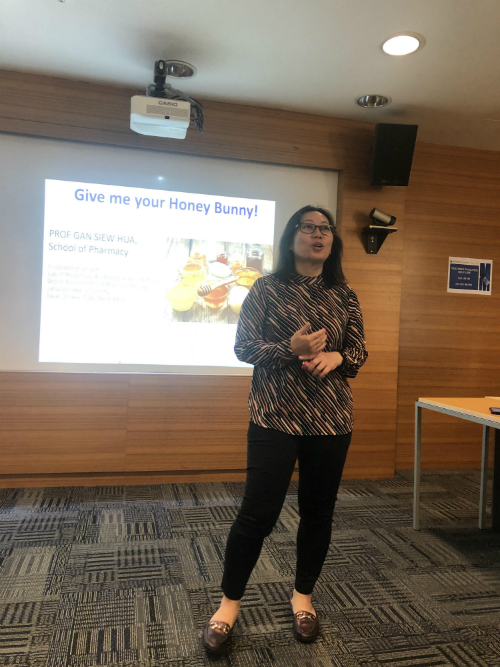 Professor Gan Siew Hua from the School of Pharmacy got the crowd hooked when she stated a fact - that honey was the combination of fruit nectar and bee's saliva. The type of honey is dependent on the type of flower the bees visit for nectars.

Honey is a sweet substance consisting of 181 components which include minerals, vitamins, amino acids and antioxidants like phenolics and flavonoids. There are two types of bees - the honey bee and the stingless bee. Both these bees produce honey.

Cinnamon honey is collected form cinnamon plantation, and cinnamon has a substance that is converted to progesterone, which suppresses the growth of testosterone. Therefore, cinnamon honey is suitable for women going through menopause. 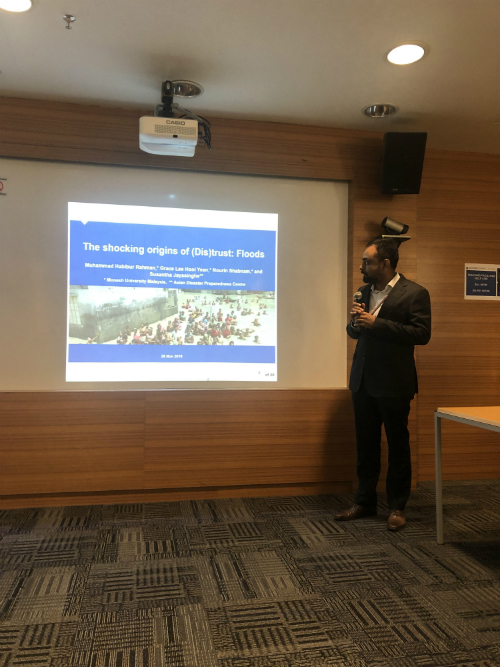 According to Professor Gan, there are eight parameters to determine the purity of honey - moisture, total sugar, sucrose, 5-HMF, colour intensity, protein, proline and its pH. Honey should be consumed within one year of its production.

Speaking on the shocking origins of (dis)trust: floods, Dr Muhammad Habibur Rahman from the School of Business stated that trust underpins the fabric economic activity and shapes the economic performance of societies.

"Despite the self-reinforcing intergenerational persistence of distrust, people may set them free from such a vicious cycle of distrust under appropriate incentives. What triggers instantaneous distrust remains a critical question," Dr Rahman stated.

Dr Rahman and his team examined the effect of the 1998 flood in Bangladesh as a natural experiment to reveal how the affected individuals instantaneously revise their pre-flood trusting behaviour in its aftermath compared with the unaffected ones. Their identification strategy exploits flood intensity across space over time, which is likely to estimate the causal impact of floods on interpersonal trusting behaviour.

From his study, Dr Rahman concluded that flood-affected individuals dampen their level of interpersonal trusts. Such adverse effect is possibly driven by their failure in accessing the credit from informal sources.