“Ants are social insects that have these amazing societies that are similar to us,” said Dr Yek Sze Huei from the School of Science during her presentation titled ‘Lessons from the Ants Society’. To reasons unknown, the male ants (drones) will die after copulating with the to-be queen ants, who will then build their colonies. A queen will continue to lay eggs for the rest of her life without mating.

The worker ants are all females and daughters of the queen. So why are ants the most invasive species in the world? It is because they have evolved and have a ‘replacement-queen’ strategy. If a queen dies, a worker will take over and start reproducing.  Ants interact with plants and most plants have co-diversified with them. “Whenever you see a plant, you will find ants,” she stated.

While ants have been typically thought of as insects that hoard food, Dr Yek referred to some of them as farmer ants. Contrary to what we may believe, leafcutter ants do not eat the leaves that they cut - they harvest plant material for their fungi farm to grow so that they can eat the fungi.

Speaking on the improbable of Cobb-Douglas (CD) utility function, Associate Professor Dr Poon Wai Ching from the School of Business stated that it has been widely used in the discussions of the theory of consumer choice. CD utility function is one of the most commonly used specific forms of the utility function in economics to study how people make a choice.

“A consumer’s total utility (TU) function is derived from the consumer preference ranking over various bundles of goods. In reality, consumers make their decisions based on their preferences, and do not normally apply the rule of max TU before making any decision,” Dr Poon shared.

In conclusion, she stated a consumer can infer not only the preference ordering but also the relative strengths of the preferences in making decision choices. In a choice-based approach, people hardly bother to consider maximising a given TU function of various bundles of goods. 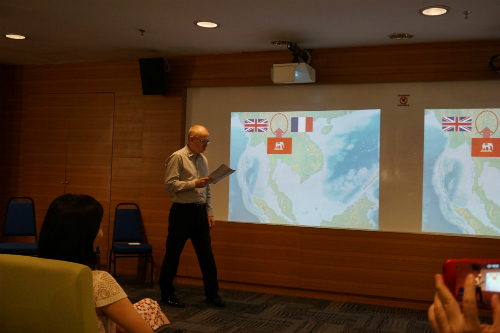 Saving the best for last, Professor Andrew Walker, President and Pro Vice-Chancellor of Monash Malaysia, reminded everyone of the hit TV show, The Fresh Prince of Bel-Air, when he decided to rap for 6 minutes and 40 seconds during his presentation. The educational and lively rap was about The Shan Rebellion in Siam (1902 -1904): “They staged a rebellion and killed some Siamese. It’s a truly first great story, so pay attention please.”

In 1902, the Siamese and Shans were caught in the middle of the British-French rivalry over North Siam. Siamese officials stopped the Shans from trading and taxed them, making life difficult for them. The Shans stole from the Siamese and got into a skirmish with the Siamese police force - killing a few policemen in the process. They were led by a man named Pakamong.

A body of troops numbering to 2,000 were sent to punish the Shans who attacked and seized the Town of Phrae. The Shan Rebellion is said to be an important episode in the formation of the modern Siamese state.