An afternoon of empowerment 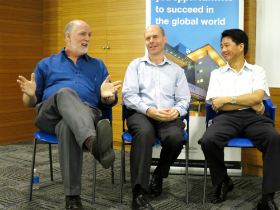 The fourth instalment of the PechaKucha took off with an interesting medley of presentations on 11 November.

Professor Daniel Reidpath, Professor of Population Health at the Jeffrey Cheah School of Medicine and Health Sciences and Director of the South East Asia Community Observatory (SEACO), spoke about how the general population lacks concern for pertinent issues such as global warming, poverty or rising carbon dioxide emissions. In his presentation titled ‘Is Public Health focused on the wrong issues and does anyone care?’, he showed that Google searches seemed to indicate that people were googling for movies and Kim Kardashian more than climate change.

He gave an example of Bangladesh as a country most susceptible to climate change, and decided to find out what Bangladeshis were most concerned about. “Unfortunately, looking at Google Trends, they are also more interested in Samsung than climate change,” said Prof Reidpath. “Which is depressing considering we’re not bothered about issues that threaten our future.”

As the second speaker, School of Engineering’s Professor Joshua Li presented his compelling research on a new microwave method that can be used in a woman’s bra for treating breast cancer. In his presentation ‘Non-invasive Microwave Breast Cancer Thermotherapy’, he proposed a device - a micro-strip patch antenna - to be integrated into a bra in order to target the specific tumour area of the breast. “This is not the same as radiation therapy, as radiation affects a large area but our approach is a targeted area,” said Prof Li. “A bra is portable and you can wear it while doing whatever you want; even take the bus or listen to music.”

The third presentation ‘Following the Gaze of Leaders: Is there a measurable impact of a leader’s gaze on their followers?’ was given by Professor Iain Densten from the School of Business. He shed light on his research into how leaders use their gaze and eye contact to establish relationship with their followers and persuade them to carry out certain tasks. Using eye tracking glasses, he intends to find out how leaders interact in a situation to facilitate influence and control attention.

The presentations concluded with a Question and Answer session with the three speakers.

PechaKucha is a series of concise lunchtime talks organised by the Professors Advisory Group (PAG) that introduces the audience to the range of disciplinary areas covered by Monash Malaysia’s academics. Meaning ‘chit chat’ in Japanese, the presentation format is 20 slides displayed for 20 seconds each, to be presented in just 6 minutes and 40 seconds.

PechaKucha is held once a month during lunch hours, featuring three speakers each time.