From art to medical radiology 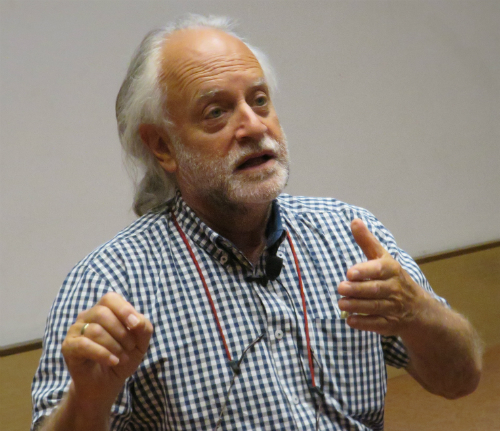 He has long been recognised as one of the greatest artists of the Renaissance. But did Leonardo da Vinci’s 15th century artistic visions truly inspire 20th century Nobel prizes in medical radiology?

“Leonardo da Vinci is not only an artist. He is, as I am going to prove to you, had totally original concepts both in anatomy and in art, and it is those concepts that led to the developments of Computerised Tomography (CT) and Magnetic Resonance Imaging (MRI) scanning,” said Professor Peter Abrahams, Professor Emeritus of Clinical Anatomy at Warwick Medical School, during the first Monash Malaysia Medical Lecture Series.

Leonardo didn’t have an education, except as an artist but he was a brilliant anatomist. According to Professor Abrahams, there were no anatomy textbooks when Leonardo did all the drawings on anatomy. He dissected more than 30 human corpses and recorded his findings in drawings. His ability to draw what he saw accurately, put together with his knowledge of mechanics, made him understand how the body works.

Leonardo had planned on publishing his drawings on anatomy, but his papers remained unpublished when he died in 1519. Presenting 30 of Leonardo’s finest sheets of studies that are on display in Edinburg, Professor Abrahams stated: “All these beautiful pictures didn’t come to light until the 1700. Why? Because they are all owned by the Queen of England!”.

Explaining further, Professor Abrahams shared that when Leonardo died, he left 5000 sheets of paper to his assistant, Francesco Melzi. Melzi organised the unbound papers to the best of his abilities, including the 300 anatomy sheets that he bound into a leather portfolio. 15 years later, an Englishman bought them and gave them to King Charles II. The folio was kept on a shelf in Windsor Castle and it remained there for 300 years, before it was discovered. Had he published his anatomy drawings before his demise, he would have transformed scientific knowledge of the human body even before the 20th century.

Leonardo had an insignificant quirk - mirror writing. All his notes were written in this manner - starting at the right side of the page and moving to the left. The purpose of his mirror writing is unknown, but one idea suggests that it was to keep his hands clean. As a left handed person, writing backwards would have prevented him from smudging ink as he wrote. His notes on the Vitruvian Man is perhaps the most widely seen piece of his mirror writing.

During his time, Leonardo produced hundreds of pages illustrating organs, bones and muscles. He was fascinated by the challenge of depicting a complex, layered, three-dimensional and mobile structure – the human body – in a static two-dimensional image, and devised many unique illustrative techniques to achieve his aims. Many of Leonardo’s drawings from the 1500 are strikingly similar to our modern medical images. Professor Abrahams’ lecture showed how astute, accurate and significant Leonardo’s anatomy drawings were and how little the detailed knowledge of human anatomy has actually changed in 500 years.

The Monash Malaysia Medical Lecture Series is organised by the Jeffrey Cheah School of Medicine and Health Sciences, who jointly supported this above lecture together with the Monash Education Academy.