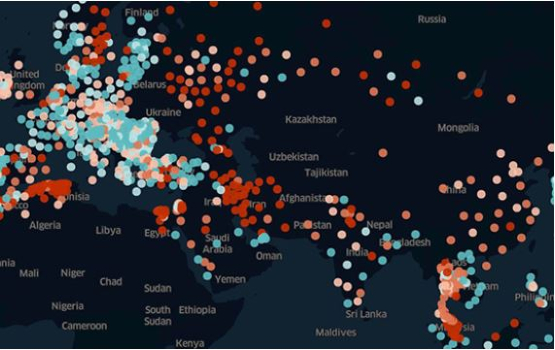 With 2,470 confirmed cases and 35 deaths, Malaysia has the highest number of COVID-19 cases in Southeast Asia. Therefore it should come to no surprise that the movement control order (MCO) has been introduced to combat the virus and to reduce the number of new cases. As COVID-19 and associated self-isolation measures transform working practices internationally, new data from a commercial spin-off from Monash University reveals internet infrastructure is being put under significant pressure as rolling lockdowns begin to bite.

The team has produced a Global Internet Pressure map that is publicly available and is being updated regularly via the KASPR Datahaus website. Users can explore the global observations in a dashboard, and download the data for specific countries.

At the time of the study, researchers say Malaysia appeared as something of an anomaly. Despite having a relatively small number of confirmed cases on 13 March, the day they accessed the latest figures, the country’s internet pressure readings were far more outsized, sitting above China, Italy, South Korea, Spain and Japan – all countries with confirmed caseloads several times larger.

According to Associate Professor Arkendu Sen, the broadband connectivity remains stable while an increase in Cellular 4G has been noticed as educational institutions have allowed e-learning to take place. He added that while the cellular services are offering extra data to its subscribers from 1 April, there are some pockets where the cellular network may not be strong for a continuous streaming data experience.

“Stakeholders of educational institutions need to adapt to asynchronous modes of learning and measures that require less data. As the period of lockdown increases in Malaysia, competing uses of the Internet for different industries such as entertainment, internet shopping as well as educations need to be considered,” he said.