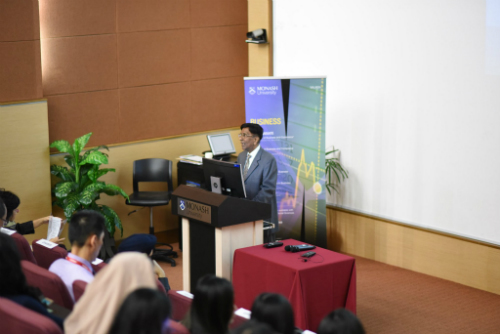 The budget which is tabled yearly is one of the most highly anticipated events of the year, as it addresses the financial health of the country, and explains remedial measures that are taken to alleviate concerns.

However, the presentation of the budget in the Parliament often glosses over worrying issues that need addressing, as populist moves aimed at quelling discontent takes centre stage.

The 2020 Budget Management Seminar, organised by the School of Business last week, brought together the brightest minds in finance and economics, to dissect the budget, and separate the wheat from the chaff.

The 2020 Budget that was tabled by Finance Minister Lim Guan Eng, came amidst the backdrop of a few issues, namely the US-China trade war, lack of innovation and skills development, the slow pace of technology adoption, challenging economic environment, the urgent need for fiscal discipline, and dependence on unskilled foreign labour.

Dr Veerinderjit Singh, Executive Chairman, Axcelasia Inc, alluded to Malaysia's heavy dependence on foreign labour and companies' reluctance to increase the minimum wage as "a perennial problem" that is a result of structural issues that have been left unaddressed.

"We want unskilled labour, we want foreign labour, and we are reluctant to increase the minimum wage. This affects the workforce. "People say that small and medium enterprises (SMEs) cannot afford to pay big wages. Well, I think at the end of the day, if you're worth your salt, you will survive. If you do it well, you will still make profits, maybe you will not make as much, but you focus on how to grow your business," said Dr Veerinderjit.

However, as the euphoria of the election victory settles, it has now become evident that the abolition of GST wasn't such a good idea in the first place.

Veerinderjit also said, although GST creates a lot of compliance costs, it is still a technically robust system that better serves the interests of the nation.

The strength of any enactment or piece of legislation lies in its enforcement. Glossy dossiers look good on paper, but it means precious little if the targeted objective is not achieved, or tangible results are not evident.

"Under SST, there's a lot more need for stronger enforcement from the Customs. There are ways in which companies can evade taxes. So it's important that the enforcement is strong," explained Dr Veerinderjit.

He also bemoaned the tendency of the government to provide tax reliefs as it only benefits the privileged few who pay taxes. Urging for long-term measures that would address the problems afflicting the poor, Dr Veerinderjit expressed hope for reforms.

"Our tax rate structure ranges from 0% right up to 28%, and then now they decided to add in the 30% rate for those earning RM2 million and above. This is a stopgap measure; there is no real logic to it other than the generation of a small amount of revenue. What they should have done is revise the old personal tax rate structure so that you can widen the bands and avoid bracket creep." "A lot of companies have refunds in amounts between RM500 million to RM1billion. But the PH government has committed to complete the payments by 2020," said Jalbir.

He further explained the 6% digital tax that will kick in from 1 January 2020. Passed in Parliament in April this year, this tax will affect subscribers of services such as Netflix, Spotify, Office 365, Dropbox, Google Play, Steam, Apple Store, and a whole host of other services and online products.

"The new govt has given assurances that the IRB will not use roughhouse tactics to go after tax evaders," he said.

The session was brought to a close with Jason regaling the audience with stories from his experience as a lawyer dealing with clients as they faced the threat of prosecution by the IRB.